Relationship Of Command by At The Drive-In

A Review of Relationship Of Command by At The Drive-In 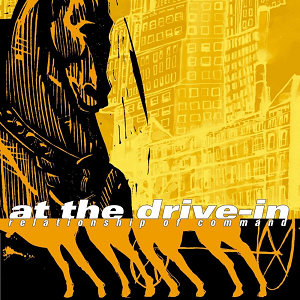 Released in February 2000, Relationship of Command by At The Drive-In is definitely something you’d expect in progressive rock music from that point in time – and more. Their sound remains unique but that’s also reminiscent to the sound of several other bands like Coheed and Cambria, Rise Against, Rage Against the Machine and even a hint of Muse and Dashboard Confessional. That’s a lot, I know.

Each track in Relationship of Command has its own individual sound. While the entire album is mainly fast in tempo, you’ll hear several different accents in each song whether it’s a change in lead vocalist Cedric Bixler’s voice; or his guitar riffing, sliding and squealing along with fellow guitarists Omar Rodriguez, Jimmy Ward; bassist Paul Hinojos’s bass line; or Tony Hajjar’s drums.

There are also two tracks in the album where you’ll hear Iggy Pop from The Stooges – on one track he plays the voice of a kidnapper demanding his ransom; the other track where he sings as backup for Cedric Bixler.

Ookay, before I let my fangirl get in the way of this review, let’s start talking about these beautiful tracks, yes?

The opening to the Relationship of Command Album is by far one of the best album intros I’ve ever heard. It opens with a heavy walking bass line and then it’s accompanied by high repetitive guitar riffing. There’s aggressive heavy breathing during the entire buildup of the song and BOOM! – you’re hit with Cedric Bixler’s strenuous vocals. While Bixler and his fellow guitarists are completely rocking your ass off you’ve still got that nice bass line from Hinojos and complimenting percussion from Hajjar.

Bixler continues to scream out the words “beware” throughout the track but completely loses it at the end when he belts it out over and over again (about six times) before the song closes.

I really like this one. It caught my full attention when I heard Bixler singing the main chorus. As mentioned earlier, some of the songs sound similar to other songs played by other bands; this one reminds me a little of songs by The All-American Rejects because of Bixler’s high-pitched vocals. And please don’t get your panties in a bunch because of this comparison – it’s just an opinion of mine. :)

Wormed our way through distant earth!

What I also admire about this track is that Bixler’s singing rant sounds pretty similar to Rage Against the Machine’s lead vocalist Zack De La Rocha (a much better comparison for some of you).

I mean, I’d totally be down for a show with the two. Just saying.

As the climax of the song makes its way in, “Pattern Against User” slows down quite a bit and you’re sent into a relaxing blend of smooth riffing, some bass and light percussion behind Bixler’s gentle singing.

The song closes with some ending percussion and Bixler shouting, “HEY!”.

“Cut away, cut away! Send transmission from the one armed scissor!” – You’re going to have this bit stuck in your head once the song is over, so please warn your friends, family, classmates, coworkers – whoever will be surrounding you after listening to this album. That being said, the song is extremely catchy.

The song closes of with some alien-like sounds that make you feel like you’re being abducted (super cool). I’m not sure if these alien sound effects are coming from the guitars or not but I’ll be pretty impressed if I find out they are.

Can someone please help me out and tell me if these are guitar manipulations or not?

Opens right away with Bixler shouting (in your face it feels like), then Bixler’s voice transitions from shouting to singing (somewhat). The guitar shredding is without a doubt epic and the drumming only makes things that much better. At 1:41 the verse, “Snuck inside the sound of sleep!” sounds very similar to the main chorus in “Pattern Against User”, so you bet your damn ass I love this song, too.

Relationship of Command turns things down a notch once you hit “Invalid Litter Dept.”. The song opens with some pick squealing, percussion and even some piano keys are blended in. There’s a short takeover of some guitar slides before Bixler opens with the lyrics. Rather than singing or shouting, Bixler talks through this bit instead. Bixler’s tone and “I’m making a point here” talking really reminds me of something you’d hear out of a Rage Against the Machine song. There’s a lot of piano keys in the breaks of the song which add the right drama to the song. After loving this song so much I decided to perform some research to see what the guys were talking about in the lyrics. The song just sounds so damn sad.

I learned that Bixler is actually singing about the murders of young girls and women who worked in the factories in Juarez, Mexico, which is located just over the U.S.-Mexican border from El Paso, Texas – home and birthplace of At The Drive-In. Bixler and the band are calling out Mexican law enforcement for their lack of response to these murders as they occurred. And that’s why it’s such an emotional song.

This one opens with what sounds like someone tuning their electric guitar. Then you’re slammed with a much faster pace than what you were left off with in “Invalid Litter Dept.”. You can hear a sick ass walking bassline that gets a little aggressive right when drummers Tony Hajjar slams on his drums. Bixler is brilliant at screaming his lungs out without his voice breaking and the guitar work he does with fellow guitarists Rodriguez and Ward.

The track turns on and you can hear ringing on a phone. The ringing, however, indicates that you’re place on the calling end – not the one being called. Then you hear a deep, nearly whispering voice say, “Hello, mother leopard, I have your cub. You must protect her, but that will be expensive. 10,000 Kola nuts wrapped in brown paper. Midnight behind the box, I’ll be the hyena. You’ll see.” As mentioned earlier, this deep malicious voice is played by Iggy Pop. Once the music breaks in (still distorted and weird), Bixler’s voice is almost drowned out with that same digital distortion. This track has a very “Marilyn Manson feel” to it because of all the distortion going on.

THIS song! I love how fast the tempo is and how wild the vocals are in this song. Yet another track where you’ll hear Iggy Pop but this time he’s singing backup vocals for Bixler. What I love most about these two vocalists is that while their vocals are completely different, they pair extremely well together. It’s simply just magical.

The opening starts with rain and thunder and then leads into another slow tempo. This opening reminds me so much of the opening to the 70’s hit “In The Rain” by the Dramatics (my father was a huge oldies listener so I thank him for knowing who the Dramatics are). The intro carries on until about 1:15 and for literally about seven seconds you hear a sweet hint of some high-pitched harmonic squealing and it’s absolutely beautiful. I honestly can’t imagine the song without it.

You’re hit with an aggressive open of all instruments before Bixler’s vocals make their way into the song a few seconds later. You can hear all guitarist shredding away on their guitars and the buildup of drums before Bixler belts out the main verse is awesome. I love the sound of the guitars ripping through the song with Hinijos’s bass supporting right underneath; and of course not without Hajjar’s percussion following right along. Non-Zero Possibility: Opens with an another distorted sound but this one sounds a little like bees swarming around. Then a distorted piano gently breaks in, soon followed by Bixler’s beautiful voice. Rather than screaming and shouting during this intro like most of the songs on the album, Bixler gently sings instead. The style of singing he’s doing really reminds me of the famous Freddy Mercury from Queen. It’s a bold statement, but I feel Bixler’s vocals deserve that compliment. The song remains slow and just when you begin to hear Bixler’s voice beginning to strain, he mellows it out, keeping himself away from shouting. I’d also say that the song resembles a similar sound to some of the music played by The Muse. The ending drowns own into muffled distortion all over again, this time making an eerie exit before the song completes.

Catacombs begins with a distant electric ringing from Rodriguez pick squealing and some clapping amidst Rodriguez’s guitar riffs. The song breaks and you’re given a moment of up and down electric guitar sliding. The song breaks again although this time the guitar slides are faint only loud enough to hear them ringing through (sounds like they’re out in the distance); as well as a walking bass line with some percussion as Bixler sings. Then the chorus blasts through and Bixler’s once calm and gentle vocals blow up into his signature screaming.

Overall impression of Relationship of Command? I really enjoyed this album. I’ll be honest with you, I never heard it until just before writing this review. Yeah, one night a friend of mine and I had been talking over drinks about At The Drive-In and when I told him I had never heard them, he completely flipped his shit.

He calmed down when I told him that I’m a fan of The Mars Volta (whose lead vocalist and guitarist are Cedric Bixler and Omar Rodriguez); but he insisted that I gave At The Drive-In a listen – particularly Relationship of Command. I am not disappointed in his recommendation not one bit.