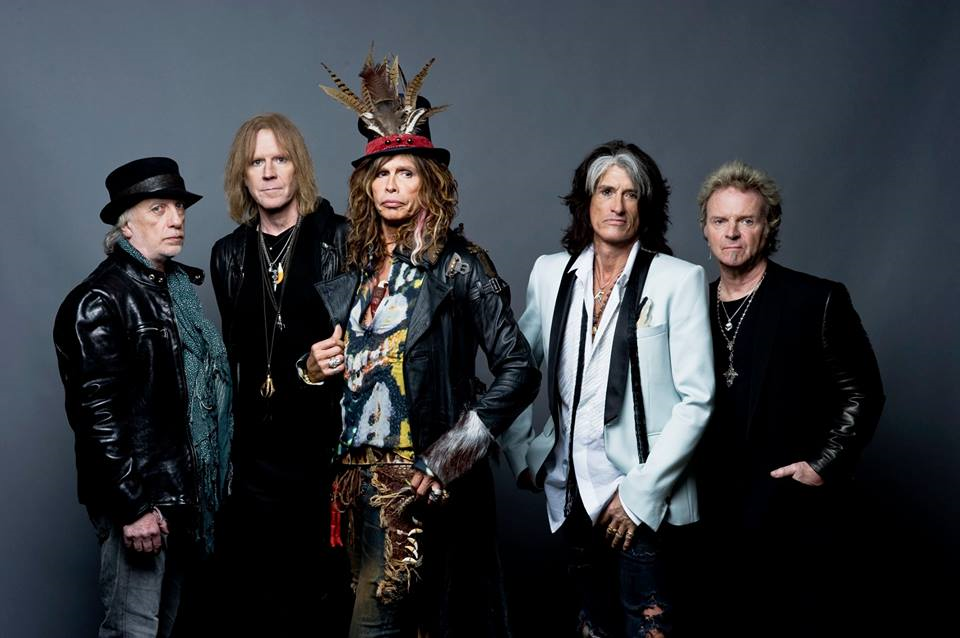 A Review of Rocks By Aerosmith 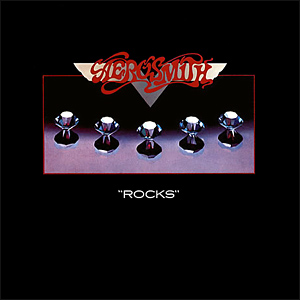 Rocks was released just after their breakthrough album, Toys in the Attic, which held some of their best-selling hits such as “Walk This Way” and “Sweet Emotion”. With the bar set so high for Aerosmith after such an incredibly crafted album, the pressure was on for them to create an album that matched the greatness of Toys in the Attic. The outcome? They did an amazing job!

The cover of the Rocks album is simple, with only five diamonds printed on the front, which appear to be placed atop a mirror that reflects each one, with the band’s name written in a 70’s style font across the top. The diamonds and mirror stand in front of a black background. My guess is that these five diamonds represent each member of the band: Lead vocalist Steven Tyler, lead guitarist and backup vocalist Jimmy Crespo, rhythm guitarist Brad Whitford, bassist Tom Hamilton and drummer Joey Kramer. The black background makes it look as if the five diamonds are in a sort of “spotlight”. The simple art to the album’s cover makes for a perfect representation for both the band members and the album itself. The five diamonds that represent the five band members, standing in the spotlight as they’re about to give you one of the best shows of your life. (How’s that for getting deep?)

Although some fans had their doubts that Rocks could actually be something great, especially when comparing to Toys in the Attic, Aerosmith proved that they were more than capable of creating yet another beautifully, and artistically crafted masterpiece.

01 Back In The Saddle

The album kicks off to a fantastic start (I honestly don’t think it could have been any better!). The intro slowly builds into the main riff and then you hear the words “I’m BACK!” screamed out from the top of Steven Tyler’s lungs. If you pay close attention, you can tell that there was some kind of sound manipulation used to record Tyler’s vocals. This was most likely so that his powerful scream didn’t overwhelm us, and ruin the song. Such a good call.

Joe Perry, who was responsible for writing the main riff to this track, was said to have written this riff using a six-string guitar (which is exactly what he used when recording this song) while laying on a hotel floor, under the influence of heroin.

Tom Hamilton’s bass can be heard throughout the song, accentuating it perfectly with those deep undertones.

I honestly can’t get over the riffs to this song. They really add a Western-like feel to this fun, upbeat opening track. And guessing by the stomping beat and the whipping sound that you can subtly hear at the song’s closing, that’s exactly what the band wanted.

Fun fact: The stomping beat is said to have actually been from Tyler’s idea to wear cowboy boots to the studio when recording this track, so that when he stomped on a plank of wood, it gave them the song’s Western-like beat. It is also said that one of the band members actually brought in a whip so that they could record the whipping sound for the end of the song. Cool stuff, right?

“Last Child” was written at the A. Warehouse in Waltham, Massachusetts, where it originally sprouted from a couple of the band members experimenting with some drums and guitar sounds and created a sound they ended up liking. The song first starts off slowly, with some relaxed vocals that lasts about 20 seconds, and then is quickly interrupted with a funky, very 70’s riff. Bring out the bell-bottoms, because this jam is full of funk!

Steven Tyler howls the words, “Home, sweet home” in the main chorus, which will leave you howling those very words a few days after hearing this song. After the second time around to the chorus, Brad takes the spotlight and slays us with his hell of a guitar solo. This guitar solo is arguably one of the best solos Aerosmith has ever given us.

Once Brad wrapped up his solo, that funky tune came right back, accompanied by some more of Tyler’s vocals, and the song continued with its fun pace until the song began to fade. As the song faded out, the sound of sirens can be heard just before it finished.

03Rats In The Cellar

The same sirens from the previous song drift into the opening to “Rats in the Cellar”, which is pretty cool because it’s almost as if the guys wanted the fun from the previous song to linger into the following track. Then the drums kick in, with a few hard chords tagging along. As you’re still in the opening segment of the song, you’re hit early on with a short guitar solo (because whoever said solos had to be toward the end of a song?). After the guitar solo, out came the lyrics, and then followed by yet another solo right after. The outro sounds a lot like someting that would come from the band Fleetwood Mac, which doesn’t surprise me as Fleetwood Mac is one of Aerosmith’s all-time faves.

At about 2:30, the vocals are no more, and it’s purely just instrumental. The pace of the song intensifies as it nears its end, and goes out with a bang! The buildup is so f***ing awesome, it almost feels like it triggers my adrenaline. That’s sourcery, right there.

Although there’s been some controversy on whether on not this is true, Joe Perry has claimed that it’s solely just his vocals we hear throughout this song. Because of the huge similarity of his vocals compared to Steven Tyler’s , it’s honestly difficult to tell if it’s really Perry by himself, or if he’s accompanied by Tyler. There are even some points in the song where Tyler’s vocals seem to stand out more than Perry’s. Again, it’s so hard to tell. I tried listening to this song over and over again, but about halfway through the six or seven times I listened to it, I didn’t even care who it was anymore. I just sat back and appreciated what a good song it is.

Give it a listen, and you’ll understand where I’m coming from.

“PLEASE! I just got to talk to you, PLEASE!” Sings Tyler, in desperation. I really like the percussion going on in this song. The riffs are beautiful, too, as they complement Tyler’s voice. While the song may have a catchy, very upbeat sound, the lyrics come to tell us of the struggles of dealing with heroin addiction (or any drug, in that matter). Hence the words (and title) “sick like a dog”.

At one point in the song, there’s a sort of switch-up in the instruments, where the bandmates switch out their instruments among each other. There’s a short interlude as this is happening, but the music jumps right back and sounds just as amazing, especially now that you know that the guys did a little switch-a-roo.

In the middle of the guitar notes that fade in and out in the beginning of the song, pay close attention because you can actually hear the sound of a door opening (because what better way to open a song than to include the sound of an opening door?).

It sounds like an E minor that’s played using the volume pedal (don’t quote me on that), just before an explosion of drums blows its way into the song. Brad follows in with a short, but extremely pleasant solo using that wah pedal. At first listen, the song can come off as a bit of a disorganized mess, as there’s quite a lot going on. “Nobody’s Fault” tends to stick to an aggressive nature, which I’m assuming was done on purpose. The song was written by Tyler, who was inspired by an earthquake that rattled California just before he wrote it. I think it’s because of that backstory, that I appreciate the wildness of “Nobody’s Fault”. (And, as a native to California, it makes absolute sense as to why Tyler chose this particular nature for the track.)

Fun fact: Because the members of Aerosmith were so shooken up over the earthquake, Steven Tyler felt it necessary to write a song about it.

07Get The Lead Out

“Get the Lead Out” was a pretty popular song when it was released in the 70’s, however, for some strange reason, it lost its popularity over the last twenty-something years. That’s a bummer, because there’s some really awesome riffing in the beginning that’s doesn’t go without some drums and a second guitar. Not only are the instruments played so well, but the lyrics happen to be really catchy:

“Get ready! I`ll show you my best. Get ready! Take hold of my wrist. Get ready! We really can`t miss. Hey, good lookin`!Whatchoo got there there cookin`? You the young spring chicken, make your feet start kickin!"

Tyler even whips out the harmonica in this song (an oldie-but-goodie instrument that happens to be on of my favorites). The harmonica adds a nice blues-y twist to “Get the Lead Out”. And let’s not forget to mention the cowbells that strangely pair quite nicely with the rest of the percussion in the song. Such a great job, and the creativity is brilliant!

08Lick And A Promise

Again, you’re given lyrics that more than likely will remain in your head for at least the next few days. The pace of the song a pretty fast, probably one of the fastest songs (if not THE fastest song) on the Rocks album. The guitar riffs are very “poppy”, and they remain consistent all through the duration of the song. As you reach close to the song’s end, there can be a crowd heard shouting the word “MORE!” The said reason behind this was because Aerosmith wanted to make this song sound as if though it were being played live in front of a crowd. Some sources say that the band got a little help doing this, by having some friends and company shout the word “MORE!” into the mic while they recorded this song in the studio. With a little sound manipulation, the band succeeded in creating the effect of sounding like it was thousands of people.

I honestly wish this beautiful ballad was longer. Aerosmith’s fans have compared this song to a previous song of theirs called, “You See Me Crying”, which is from their Toys in the Attic album (and remember, we absolutely loved everything about Toys in the Attic). In my opinion, “Home Tonight” exceeds our expectations of a song like this. The combination of the piano and the lyrics that were sang so perfectly, and whole-heartedly just completely takes your breath away. You might even find yourself with a face full of tears once it’s over.

Despite “Home Tonight’s” too soon of an ending, it’s still a beautiful piece that needs to be replayed at least twice for you to capture every emotion of the song.

Which songs would I recommend? All of them.

As mentioned earlier on, this album proved to us that Aerosmith was fully capable of producing masterpiece albums, back-to-back. Rocks fits so well with being the album right after Toys in the Attic. The album has absolutely no weak points, making it one of the best rock albums of all time (and I truly mean that).

Which songs would I recommend? All of them. But if I really had to choose a few, I’d have you take a good listen to “Last Child”, “Home Tonight” (obviously), “Sick as a Dog” and “Nobody’s Fault”.